An absolute inspiration to everyone he encountered, Iggy was a true cricketing giant in Kent, the county where he spent his entire playing career.

Born in the town of Farnborough, within Kent's borders, on 8 October 1964, Iggy's natural height marked him out as a fast bowler to watch from an early age. The tall seamer made his professional bow for the Canterbury-based side in 1986, going on to make 305 senior appearances and claiming an impressive 693 wickets across first-class and List A cricket, including 25 five-wicket hauls. Iggy received international recognition in August 1989, appearing for England against Australia at the Oval, and he went on to make seven appearances for his country, including three Test caps. Iggy played his last professional game in 1998 at 33 years of age, one year before his life would change forever.

In 1999, Iggy suffered an epileptic fit whilst playing Minor Counties cricket for Berkshire. Routine checks by doctors revealed an inoperable brain tumour, which Iggy was able to manage successfully with medication for a period of over 10 years. During this time he worked as a teacher at both Sutton Valence School in Kent, where he would meet future wife Liz, and Apperley Bridge, West Yorkshire, where he also played club cricket locally for Bingley CC. He used his story to inspire others throughout this period, raising over £300,000 for the Brain Tumour Charity, the largest dedicated fundraiser of research into brain tumours globally.

However, things took a turn for the worse when the tumour showed signs of growth once more in 2009, and then again in both 2015 and 2016. Iggy's health problems were compounded when he suffered major strokes in 2018 and 2020 which left him in need of end-of-life care at his home in Keighley.

Throughout his journey, Iggy's strength and courage in the face of adversity were nothing short of inspirational. Beloved by his students throughout his time in teaching, he went on to father one daughter, Beth, now eight years of age, as he built a family of his own alongside Liz. Iggy continued his charity work as he raised his young family, increasing awareness of the Professional Cricketers Trust on top of his patronage of the Brain Tumour Charity.

In April 2021, Iggy publicly revealed the support that he had received from the Trust in an emotional video interview, which led to an outpouring of support and goodwill from the cricket community and beyond.

He went on to lead from the front in the charity's 5k May campaign [5ferIggy] shortly afterwards, raising an incredible sum of over £25,000 for the Trust. 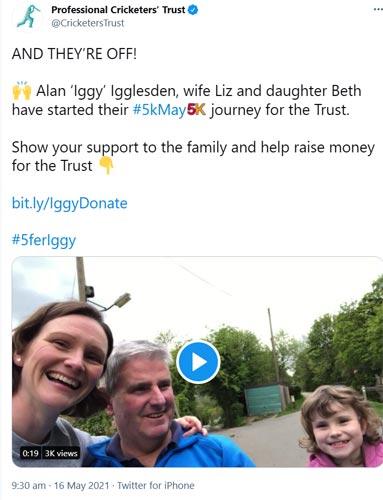 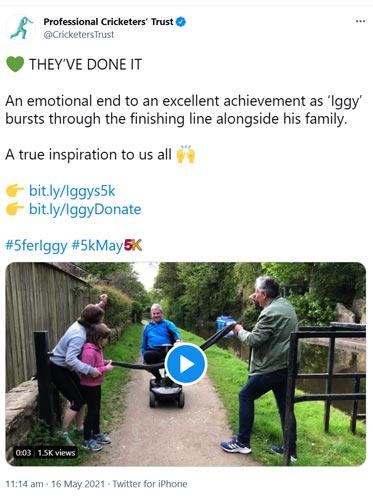 Iggy's efforts on behalf of the Trust were characteristic of his unwaveringly positive attitude towards life during his final years. He remained steadfastly committed to those who he loved, retaining a sharp sense of humour and a remarkable zest for life, even appearing via FaceTime at a golf day held in his honour to raise funds for both the Trust and the Brain Tumour Charity as recently as October. He will be sorely missed by everyone associated with Kent, as well as the wider cricket community.

About the Professional Cricketers' Trust charity 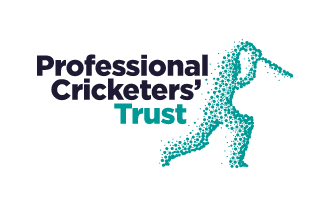 As our sport’s leading charity, we support the lifelong health of PCA members & their immediate families. We look out for players throughout their careers & long afterwards, funding life-changing medical assistance, crisis helplines & educational programmes.